Cardinals may get Lezcano

DALLAS – Sixto Lezcano may be headed for St. Louis. Or the Phillies. Or he may stay in Milwaukee.

Among those most interested in how all this turns out are Ted Simmons, who could become yet another instant millionaire; Lezcano, who would like to know where he'll be playing baseball in 1981; and Bob Boone, who just may end up playing in the shadow of Disneyland.

Just as the Phillies were once again closing in on a deal for Lezcano, the Brewers outfielder appeared to be headed to the Cardinals in a multi-player deal.

The major factor – maybe the only factor – holding up the deal is Simmons' right to veto any trade involving him. He is asking for a cool $1 million to waive that right.

If no one is willing to buy Simmons' affections, the Phillies are still in the running for Lezcano. The Phils have offered pitchers Randy Lerch, Dickie Noles, Ron Reed and Scott Munninghoff for Lezcano.

But if the Simmons-for-Lezcano deal happens, look for the Phillies to go after the Angels' Don Baylor. He could be had as part of a deal that would send Boone to Anaheim, if some contractual problems involving Boone could be smoothed out.

The interleague trading deadline is less than a day away now, and trading deadlines, like strobe lights and a couple of drinks, sometimes make people look a lot better than they used to.

At first, the idea of dealing Lezcano for Lerch and Noles didn't look so hot to Brewers general manager Harry Dalton. But, as the trade hours dwindled yesterday, Dalton reconsidered.

Suddenly, Dalton decided that it might not be a bad idea to get in touch with the Phillies for the first time since Monday.

The Phillies were keeping their options open, though. Phillies vice president Paul Owens canceled his daily press briefing so that he could continue talks with the Angels. Earlier in the day, Phillies publicity director Larry Shenk, who was appointed to hold the press briefing in Owens' place, boldly appraised the chance of a Phillies-Brewers deal being made as eight on a scale of 10.

That, however, was when it had seemed that Lezcano somehow had been freed from the Brewers' infinitely pending deal with St. Louis.

Owens said Wednesday that he was willing to sweeten his offer for Lezcano, an all-around outfielder who is only 27. But he wasn't sure he would get the chance.

Noles and Lerch were definitely in. The problem was agreeing on other names. Milwaukee asked for Mark Davis and Marty Bystrom. They might as well have asked for Steve.Carlton and Mike Schmidt.

In addition to angling for Baylor, Owens also talked with Atlanta about Gary Matthews yesterday. The Braves would like pitchers Larry Christenson or Bob Walk.

But Lezcano is the most complete player of the three available outfielders, and his $303,000-a-year contract has several more years to run. Baylor and Matthews are approaching free agency.

So, Lezcano was the guy they wanted.

NOTES: Elsewhere, the Cubs swapped well-traveled catcher-outfielder Cliff Johnson to Oakland for lefthanded pitching prospect Mike King, who hasn't won a game in professional baseball. Free-agent pitcher John D'Acquisto (2-5 with San Diego and Montreal) signed with California.... The National League voted to limit to five the number of coaches a team can dress for a game.

"It looked extremely rocky for

the Mudville nine that day;

The score stood two to four,

with but one inning more to play...."

Ernest Lawrence Thayer's epic poem, "Casey at the Bat," never sounded the same as the night Tug McGraw, backed by Peter Nero and the Philly Pops, performed it at the Philadelphia Academy of Music. That's the beauty of Tug McGraw. Nothing he does – whether it's throwing a baseball or holding a press conference or heading for the dugout after a game-ending strikeout or reciting a poem – turns out the same as when anybody else is doing it.

Only a Tug McGraw could move, in one swift, graceful leap, from center stage in the World Series at Veterans Stadium to center stage at the Academy... and appear equally at home in both places.

Only a Tug McGraw could squeeze so much fun, enjoyment, delight out of a championship baseball season.

No need to search for the man's secret. With Tug, you always get the feeling there are no secrets, that he's sharing his innermost feelings with the world. One look at him and you know he cares. You know he's caught up in whatever it is he's doing – be it putting a third strike past Willie Wilson with the bases loaded in the ninth inning of the final World Series game or past the legendary Casey in the last stanza of Thayer's poem.

There have been a lot of big moments in Tug McGraw's life, but surely those two strikeouts rate a special place on his all-time list. So what if Wilson was fighting a World Series slump when he came to the plate with the bases loaded in the ninth inning? Who cares if Casey, for all the clutch hits he'd collected over the years, never could hit a good screwball? Those two strikeouts will always be a part of the Tug McGraw story... and of the Philadelphia story, too.

The emotions surrounding the strikeouts were "in many ways very much the same," Tug was saying yesterday at a press conference called to herald the release of a record album featuring -natch – "Casey at the Bat."

"Oftentimes, 99 percent of the time, when the phone rings in the bullpen and they say, 'McGraw warm up,' I get butterflies and my knees get real weak. I feel like I'm totally out of shape," McGraw told an. admiring audience of music-lovers who had gathered in a three-floor auditorium at Wanamaker's downtown store to get a close-up look at the man who injected new life into Phillies baseball and Thayer's poem.

"It's just a nervous reaction," Tug went on. "Sometimes I'll get to the mound and I'll look around and I'll still have that real weak, nervous feeling. But then once you throw a pitch and you get into the action it seems like all that goes away, and the nervous energy turns into a positive force and it feels like it makes you stronger. And sometimes when that's happening and everything, as Schmitty (Mike Schmidt) would say, is in the flow, you feel like you can throw any pitch to any hitter at any time.... "

At the Academy that night... I'd never done it before; I had no idea what the response was going to be. I didn't know if I was going to freeze up, get confused, forget my lines, blank out or whatever. But once I got the first couple of sentences out it was a great feeling. It was back to the ball park with all your pitches working. It was really fun."

His presence, his actions, his antics added fun to the World Series and to the post-Series celebration at Kennedy Stadium, not to mention yesterday's press conference.

You'd think he would be talked out by now, somewhat jaded by the weeks of TV appearances and signing autographs and answering questions. Not McGraw. He was as fresh, as enjoyable, as much fun as ever.

Somebody asked him if he had any background in dramatic work prior to his debut at the Academy of Music, and Tug replied, "Just talking to sportswriters. I really put on an act there."

Another man said, "Tug, when you pitched in the World Series you gave us all heart failure."

And McGraw grinned at him and said, "You sure recovered fast."

Within minutes, he had them eating out of the palm of his hand, had them as helpless as Willie Wilson had been in the ninth inning of the sixth game.

They asked him how difficult it had been to memorize all those lines, and he said, "That was a real challenge for me because in the past all I had to worry about was one's a fast ball, two's a curve, three's a slider and wiggle the fingers for the screwball, and that's been the extent of my mental concentration. It worked out well, but that certainly was a surprise to me because I was never paid a dime for my brains."

For the better part of an hour he had them laughing, had them asking him for autographs, had them enjoying the Tug McGraw those of us on the sports beat have been enjoying for years. "It's been a lot of fun," he said about his entry into the recording field. "Certainly it's not going to be a primary career, at least for another 10 years until I retire from baseball."

He's 36 now, and so there was more laughter, and Tug cheerfully joined in. It wasn't until the formal press conference was over that he grew totally serious and talked about how close he thought he was, only a week before, to becoming an ex-Phillie.

"Last Thursday – that was the breaking point day in my negotiations," McGraw said. "I was getting scared (about the possibility of not being able to reach an agreement). 'You know what it took? 'Goodbye. Thank you. That's it. It's all over.' That's what it took. Then they called me back."

He had made up his mind "to exhaust all avenues with the Phillies" before signing with anybody else. "I didn't want to go to, say, Milwaukee, Montreal, St. Louis, or out on the West Coast and talk to those people if I wasn't prepared to sign," Tug explained. "I wasn't going to take an offer from them and run back and show it to Ruly (Phillies owner Ruly Carpenter), because I don't think it should have made any difference to him."

The owner, not surprisingly, saw it a little differently.

At that point, McGraw said, if the Phillies didn't act he was prepared to sell his services to the highest bidder. "I was going to go for money," he said frankly. "I wasn't going to use. the city, the location or anything else (as a factor). I was going for top dollar if I left here. Top dollar.

But the Phillies did act, and the deal they offered – "better than people think," Tug said – kept him in the city that has taken him to its heart.

For that, we should all be happy. Not that baseball wouldn't have survived in Philadelphia without. McGraw. It has survived, and flourished, despite the loss of Simmons and Foxx, of Alexander and Klein, of Roberts and Simmons, and it will survive when McGraw leaves.

But let's face it: Without Tug it won't be as much fun. 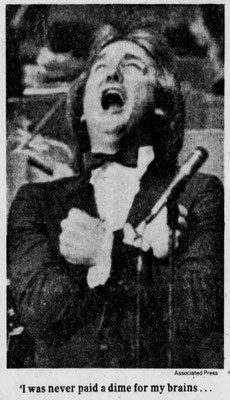