It seemed even more incongruous to see Phillies pennants adorning the walls of the golf and tennis outbuildings at the swank Palmetto Dunes resort.

This is where the World Series parade finally ended, rimmed by the lush greenery of the George Fazio and Robert Trent Jones courses, 36 holes of almost-Heaven for those of the golf persuasion.

The Phillies are very big in this significant corner of the sporting and leisure world, an old, established firm.

SEVEN YEARS ago, Mike Schmidt figured it would be fun to sponsor a weekend golf tournament here at the end of October, to invite players from other baseball organizations and athletic walks of life to join the Phillies for a long weekend of golf and partying. No professional golfers, just celebrities and enough average duffers to make it a fun weekend.

The concept took off like a Schmidt home run. The event is now considered a staple of the island's fall economy, the last big influx of high-rollers before the winds and chilly rains of winter. This was the seventh annual Mike Schmidt Golf Classic and this year 145 athletes and weekend golfers showed up to compete in the three-day team event which combines best-ball and handicap formats to insure that the most abject 125 scorer has as much of a chance to win some prize money as a guy with a three or four handicap. Another 100 or so assorted wives, kids and friends showed up to watch, play tennis and relax. It was a nice weekend for the folks at Palmetto Dunes. Y'all come back next year, Mike, heah?

Thanks to a kitty swollen to $30,000 by the traditional pre-tournament betting, Atlanta slugger Bob Horner's winning five-man team left the island with about $1,500 each. Phillies broadcaster Rich Ashburn saw his team fall one stroke short of victory – no less than three birdie putts rimmed the cup on the 18th hole but won enough to more than cover the price of the tournament package.

"Now I know why I didn't play golf for two years," righthander Dick Ruthven said, scowling through the beard he's growing. "I hate this game."

RON REED LOVED it Saturday. The endangered veteran reliever rang up a hole-in-one on the 160-yard sixth hole at Fazio, a gorgeous layout rated as one of the nation's top 100 courses.

When Reed's seven-iron dribbled into the cup, the 6-7 righthander let out a whoop heard from Fripp's Island to Calibogue Sound.

It should also be noted that Palmetto Dunes survived the presence of a dozen members of the world champions. And it was not necessary for this security-conscious island which has 15 golf courses and 500 tennis courts for a population that never exceeds 25,000 to double the police patrols. Women and children were safe at all times.

In case you missed the latest issue of Newsweek magazine, you can appreciate the terror potential of having "The Malevolent Phillies'," in town for the weekend.

"The Malevolent Phillies." That's the headline on a one-page ax-murder by Newsweek columnist Pete Axthelm. It is perhaps the most savage piece of journalism ever aimed at a championship professional sports team.

When combined with some of the post-parade stories published in Philadelphia last week, the Axthelm piece guarantees that there will be no 1981 thaw in the clubhouse. The Phillies were particularly upset by Bake McBride's critique of Schmidt's selection as the World Series MVP.

"SOME GUYS just couldn't wait to bleep on our parade," Greg Luzinski rumbled the other day. "I guess there are some writers in town . who just couldn't stand the thought of us finally winning the whole thing."

The athletes, many of whom have not had a chance to read Axthelm's vitriole, were also upset by a vintage bleeding hearts column which seemed to suggest that winning should have been secondary to salving the feelings of dumped lefthander Randy Lerch.

"The bottom line," Ruthven said at breakfast yesterday, "is who was the better pitcher. Randy or Marty Bystrom? I think the answer to that is so academic it's not worth discussing. They had to make a decision that affected the entire Phillies ballclub."

Some samples of the Axthelm piece: "... The Phillies celebrated as they had played against Kansas City, in bullying and abrasive style. Shortstop Larry Bowa sneered that the boos of the fans had inspired him. Outfielder Lonnie Smith led a few teammates in obscene chants directed at the press. Ace pitcher Steve Carlton withdrew in sullen splendor to the off-limits trainer's room, while sycophants hurled beer at the reporters who maintained their demeaning vigil outside the door of the sanctuary. When (Tug) McGraw belatedly joined in the mood, there seemed to be only one flaw in the script. The police attack dogs who snarled at the fans during the final inning were aimed in the wrong direction..."

I WONDER WHERE Axthelm was in 1973, when Jerry Grote of the not-so-lovable Mets drenched columnist Dick Young with a pail of ice water during a pennant-clinching celebration that bordered on riot? Where was he the same year when a morose, washed-up reliever named Eddie Watt splattered a half-dozen writers with a gallon of hot barbecue sauce after the Orioles beat the Mets?

Was Axthelm on the scene in 1975, when the usually stately Reds clubhouse was turned into a combat zone by a drunken, destructive Pedro Borbon? Did he happen to catch any of the bitter little scenarios involving the press, Ron Cey, Davey Lopes and Bill Russell when the Dodgers were losing the 1978 Series to the Yankees? Was Pete around the batting cage in Oakland the 1974 afternoon that Reggie Jackson challenged a syndicated columnist named Murray Olderman?

"It is," Axthelm wrote, "that the most memorable image of this World Series is a nasty one – that of reliever Dickie Noles firing a fastball toward the jaw of Royals superstar George Brett..."

You'd think that was the first time Brett, a totally fearless hitter who was not the least bit gun-shy after the Noles knockdown, had never been flipped before. Is Axthelm aware that the American League has been a paradise for head hunters since the DH rule guaranteed that pitcher would never have to say he's sorry. Did he take the trouble to find out that sometimes Noles has trouble hitting any part catcher Bob Boone, let alone a guy's chin?

"I THINK A lot of people in the national press were very upset that the Phillies became world champions," said Schmidt-Steve Carlton agent Dave Landfield, here to help Schmidt run the tournament. "I think they wanted to see the Phillies lose so they could rip the team and city. I think they were hoping there would be violence after the sixth game, bad crowd behavior at the parade. Superb police work prevented violence and the parade crowd was the happiest I've ever seen, but that's not the way the script was supposed to end. They can take all the cheap shots they want at this team now that it's over, but they can't change the fact that the Phillies won the baseball championship of the world."

There are some festering wounds, though. Luzinski still is simmering over the way Dallas Green shrugged him out of the lineup in Gsme 3 without asking The Bull if he was well enough to play. "He didn't say a word to me the rest of the Series," Greg says. "I think I’ve been a part of this team long enough to deserve better than that. I'm glad we won this thing for Paul Owens, Ruly Carpenter and his father Bob Carpenter."

Luzinski knows he's already being shopped around. He told Orioles Manager Earl Weaver he'd like to play for him next season. Weaver reportedly said he'd like to have Luzinski in his lineup, but that Owens is asking for of his starting pitchers.

HOW CAN A team that won it with pitching be looking for another starter? Hey, Lerch is as good as gone, Larry Christenson is poised to play out his option and Nino Espinosa’s shoulder is still ailing.

So they had some fun this weekend, far from the madding media's ignoble strife. The rumors will be cooking on the hot stove soon enough. The re-entry draft is right around the corner, the winter meetings are just a month away, and trade rumors will be flying like snowflakes again.

Nobody ever said the off-season was gonna be easy for the world champions... 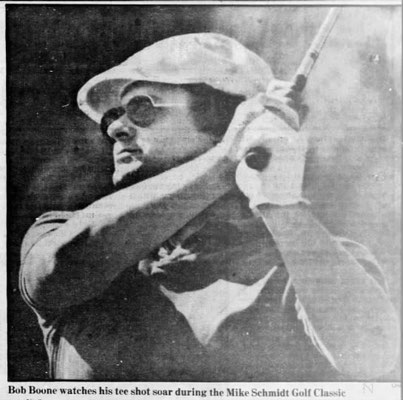 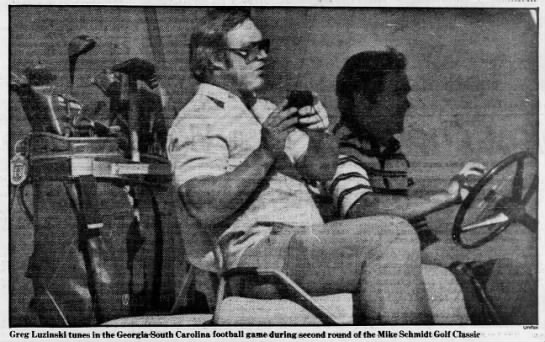