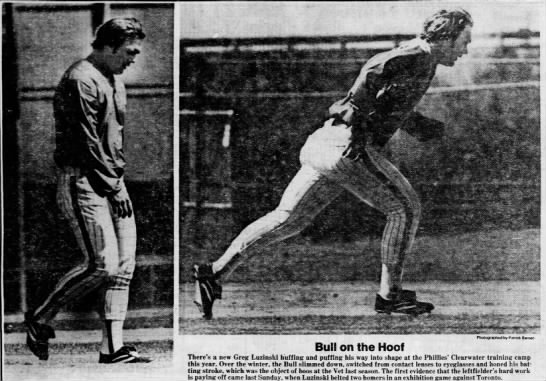 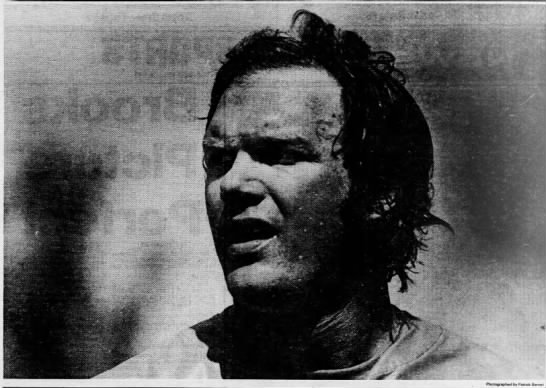 CLEARWATER – If Paul Owens were to lay a cornerstone to symbolize the emergence of the. Phillies from the dank basement of 1972 to the penthouse of contention, the inscription could read. "Del Unser 1973-74."

Unser's solid center field play in those seasons helped pave the way for bigger and better things. Del became a billboard for the bal-lclub's ascendency to mediocre respectability, a stepping stone as it were. When Owens passed Unser on to the Mets in the Tug McGraw deal, he did so with a deep sense of gratitude.

"We couldn’t have built to the division championship level without a guy like Del," Owens said after the deal which solidified the Phillies' bullpen.

A year ago, Unser was teamless, an orphan in the free agent storm. He bad played out his option in Montreal. Seven clubs claimed him but he couldn't reach terms with any of them. A 34-year-old outfielder coming off a.196 season doesn’t exactly have great leverage.

"PAUL CALLED ME and invited me to work out with the club." Unser said yesterday. "He said he couldnt guarantee me a job or a contract, but that if I was going to catch on with somebody I needed to get in shape and that I was welcome to get in shape with the Phillies."

Owens claimed Unser in the February draft of guys who hadn't signed and he gave him a two-year contract after the Richie Hebner trade. Under the free agent guidelines. The Pope didnt even owe the Expos a player.

Unser rewarded Owens with a.298 season in a utility role which saw him play first base and all three outfield positions. And he wrote his name into the record book, perhaps forever, when he pounded homers in three consecutive pinch-hitting appearances. He wound up as a.304 pinch-hitter, with four homers and 14 RBI.

"I like to think of myself as a guy who was here when it started to roll," Del said. "I like to think I was here when a lot of the guys were young and made young players' mistakes bat had all that awesome ability that has materialized over the years. You knew it was coming and you knew it was just a couple of years away. We've got the best centerfielder in baseball now and we've got Tug McGraw."

Unser's on-field playing time dropped in the second half of the season and he has been around the game long enough to know precisely why.

"I UNDERSTOOD WHAT was going on as far as them using Greg Gross more," Del said. "He was going to be a free agent and if they didn't show him some interest he would have definitely gone that way. So he played and I didn’t in a lot of situations where I was playing earlier in the year. That hurt me a little bit clause-wise in my contract and a few things like that. I still love to play here as opposed to anywhere in baseball and some of things you don't mind, particularly where his age is so much younger than mine. I would like to sign a contract for a couple of more years. I'm set up for this year, but after that... If they don't show me some interest by the middle of the season I'm just going to have to go free agent again whether or not I have a good year."

That's the way it is these days for aging utility players. Both Unser and the Phillies know the drill.

"I just want to try to get some security, " said Unser, who is a successful real estate salesman in the San Francisco area during the off-season. "It seems like the older I get the smarter I get about hitting, staying in shape and a few other things."

Owens told Unser to come on down one morning last February. Not that he was eager, but Del hopped a night flight and was in uniform the next morning. The first man he sought out was batting coach Billy DeMars.

"IT WORKED OUT well; it meant getting back with Billy DeMars," Unser said." "That helped immensely. He just has a way of relating to me that no other hitting coach has had."

"The long balls I gave the club kind of materialized," he said. "I've always had a little power. Maybe from not playing that much all my power got bottled up, maybe pinch-hitting got all that adrenalin going and my stroke was a lot more refined than it was in any year in the past. I think I blame the home runs more on the actual stroke than on strength or power."

Whatever, Del Unser gives the Phillies' left-handed bench a certain poise and maturity. When he comes out of the dugout, you know he'll be ready. And when he sits for long stretch, it will be productive sitting. He'll study' the pitchers and encourage young players like Lonnie Smith.

Del Unser has always lent a certain something to a Phillies uniform. Call it class.

PHILUPS: Steve Carlton allowed just one hit, a wind-blown flare to shallow right, and only one other ball out of the infield in four very sharp innings against the Expos yesterday in Daytona Beach. But Montreal rallied for two soft runs in the eighth off Ron Reed to snap a scoreless tie and beat the Phils, 2-0. Under Dallas Green's rotation policy, regulars Larry Bowa, Pete Rose, Mike Schmidt and Manny Trillo worked out at Jack Russell Stadium... Green praised the pitching of rookie righthander Scott Munninghoff and Dong Bird, who is obviously being preened for a trade... Report from Vero Beach: Phils offered Garry Maddox to the Dodgers for Don Sutton. Sutton refused to approve the deal.

"The only dugout I ever want to sit in at Dodger Stadium is the Dodger dugout," Sutton reportedly told GM Al Campanis... Reds, meanwhile, reportedly have placed outfielder Ken Griffey on waivers... Expos have a first base problem. Rusty Staub may be over the hill and Dick Williams doesnt think Warren Cromartie drives in enough runs to play the position full time. And Ron LeFlore's next hard throw from left field in an Expos uniform will be his first... Warren Brusstar's right shoulder is bothering him again and Nino Espinosa is not nearly ready to pitch.