For the time being, even though it is unsuccessful, the Lerch philosophy is being tried. In the end, however, the young left-hander will probably do it Green's way.

Moments after the game, Green said one of Lerch's biggest problems is that he considers his breaking ball his out pitch.

“Three bad innings and three good innings," the manager said, referring to Lerch. "The three bad ones killed us. He didn't pitch very well, but I saw some positive things. He had a good, live fastball and threw some good breaking balls.

"He doesn't have enough experience to know what he wants to accomplish on a given day in spring training like a Steve Carlton does. But he's learning more each day and learning to stay within his own abilities better."

Green, though, would be a lot happier if Lerch concentrated on his fastball.

"He has a thought in his mind," said Green, "that he has to get his breaking ball over to be a successful pitcher. I think differently, but I am letting him guide himself right now. I think he has good enough stuff to pitch with his fastball regardless of what kind of breaking ball he has. He'll throw two very good fastballs, then one very bad fastball. When we get him throwing three good fast-balls, he'll be able to pitch that way."

Carlton, to a degree, is Lerch's mentor and it is suspected that because Steve has such a nasty slider Randy thinks he should make the breaking pitch his No. 1 delivery.

"I would rather see him work on the fastball first and get that where he can handle it in any given situation," said Green. "The breaking ball will come. It's a feel pitch, but Randy Lerch is not going to be a breaking-ball pitcher like Carlton. Consequently, I think he should throw 75 percent fastballs."

"Then, he had to come in 3-2 with the fastball and everybody in the ball park knew what he was going to throw," said Green. "A 2-2 breaking ball is for certain pitchers who have the good feel for it. To me, a 2-2 pitch is a critical pitch."

Somebody asked Green when he would step in and exert his authority over Lerch.

"Not now," said the manager. "Randy will know when it is time. I don't have to kick his butt right now. There's plenty of time."

"I want to throw breaking balls at least half the time down here," said Randy in defense of his stubbornness. "And I want to throw them in situations where I wouldn't normally. I figure if I can gain a lot of confidence in it now, I can walk into the season and feel good about it.

"Basically, I feel pretty good. I still feel like my rhythm's' messed up. One time I'll throw the ball where I want it; the next time I'll try and do the same thing, and my release point isn't right where it should be.

EXTRA POINTS - Doug Bird set the Blue Jays down in order in the seventh, causing Green to say that the reliever is throwing better than he did at any time in 1979... Rookie catcher Keith Moreland had three singles in four at-bats... Bake McBride had a double and a triple... Nino Espinosa has been told to rest his painful shoulder for six days... Player Personnel Director Paul Owens said yesterday he has submitted a list of players he is willing to trade to the Chicago Cubs for Bruce Sutter... It's highly unlikely, however, the Phils will be able to land the ace reliever... A record Jack Russell Stadium crowd is expected today when the Yankees come to town... Dickie Noles will pitch against Luis Tiant... The game will be televised back to Philadelphia by channel 17. 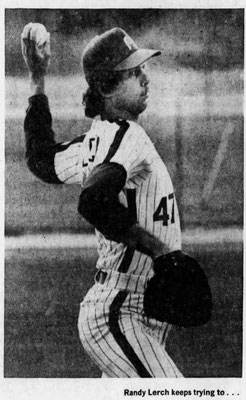 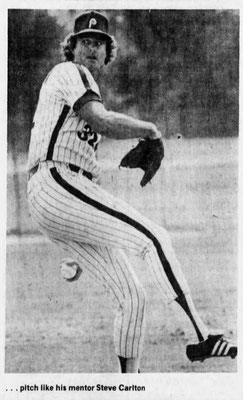