Call the coroner. Delay the autopsy. The Atlanta Braves, presumed dead after losing eight of their last 10 games, showed signs of life Saturday night at the Stadium.

With a combination of pitching and hitting not seen since the All-Star break, the Braves swept a doubleheader from the Philadelphia Phillies, winning the opener 5-2 and the nightcap 7-2.

The seasons second largest crowd, 35,524, watched the Braves win for only the third and fourth times since the break. But a non-paying observer, Braves manager Bobby Cox, left the Stadium with the biggest smile of all on his face.

The Braves might have been beaten, though, if not for a pair of sixth-inning rallies. In the first game, the Braves scored four runs in the sixth two on a homer run by Gary Matthews to break a 1-1 tie. And in the second game, they put together seven hits in the sixth to score six runs and overcome a 2-1 deficit.

The offense was backed by two excellent pitching performances, a five-hitter by Doyle Alexander in the opener and a combined seven-hitter by Tommy Boggs and Rick Camp in the second game. Alexander won his eighth game of the season, tops on the Braves' staff, and Boggs his fourth.

The two wins moved the fifth-place Braves within seven games of .500 at 41-48, 8½ games off the National League West lead.

The Braves won the first game as they win most of their victories, on the strength of the long ball. They then won the second game largely because of two bunts. In all, they had 21 hits, which Alexander greeted as a sign their hitting slump might be ending.

"I'm hopeful this will get us going," he said. "We should be scoring a lot more runs than we have been in this park. With our offense in this park, we should score five or six every game."

Tied 1-1 entering the sixth inning of the first game, the Braves exploded for four runs against losing pitcher Dick Ruthven – one on Chris' Chambliss' RBI single, two on Matthews' homer, one on Horner's homer. Ruthven had not allowed a homer in his last 85⅓ innings.

With a four-run lead, Alexander coasted the rest of the way, allowing a final Philly run in the seventh.

Horner's second homer of the night came in the fifth inning of the nightcap, at the time bringing the Braves within a run at 2-1. But it was in the next inning, without benefit of a home run, that the Braves put the second game away.

The inning began with a pair of bunts, of all things.

Winning pitcher Boggs led off the inning with a perfectly placed bunt single down the third-base line. Jerry Royster, starting in place of Glenn Hubbard at second base, followed with a similar bunt, which catcher Keith Moreland threw into the right-field bullpen. Boggs scored the tying run from first base on the throw, and Royster moved all the way to third base.

The Phillies argued loudly that Royster's bat made contact with the ball twice on his bunt, but none of the three umpires went along.

What beat the Phillies were the five hits which followed Royster's bunt and Moreland's throwing error.

After Dale Murphy bounced out to third and Chambliss was intentionally walked, Matthews singled in Royster, Horner reached on a fielder's choice which forced Matthews at second, Burroughs singled in Chambliss, Bill Nahorodny scored Horner and Burroughs with a double off the center-field fence, and Larvell Blanks singled home Nahorodny.

The Phillies used three pitchers in the inning – starter Dan Larson, Dicky Noles and Ron Reed – before Reed, an ex-Brave, finally got the third out on Jeny Royster's bouncer to first.

"That's what I get paid for – to drive in runs," Matthews said.

The pitching also was in contrast to much of what the Braves have gotten since the break. Only twice in 10 games before Saturday, in fact, had the Braves held the opposition to fewer than five runs.

Alexander pitched one of his finer games in the opener, improving his record to 8-5 by allowing only five singles, Boggs pitched six strong innings in the second game, allowing six hits, before yielding to Camp. 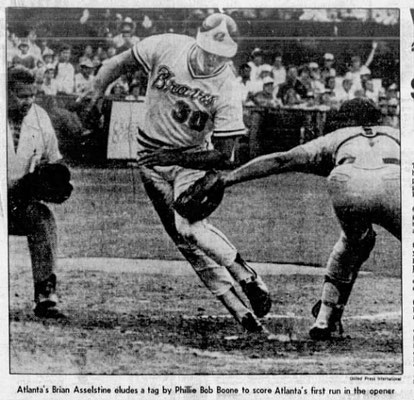 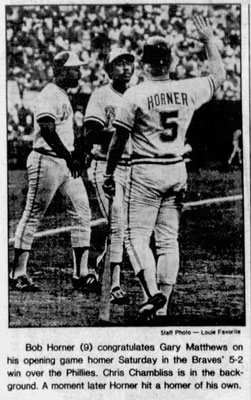