PHILADELPHIA –  It seems to be Randy Lerch's fate this season that, when the Phillies' lefthander pitches well, the guy on the other team pitches better.

Take last night for instance. Lerch produced perhaps his finest outing of what has been a frustrating year, only to lose, 1-0, to the Montreal Expos and Scott Sanderson.

"He pitched like hell, no question," said Manager Dallas Green after his club stepped 2½ games behind the Expos in the National League's East Division standings. "But the other guy pitched 10 times better. Randy knew we needed a (well-pitched) game from him and he gave it to us. It was just unfortunate that our offense went south."

SANDERSON, a long, lean righthander with a sizzling, sailing fastball, must be credited with directing the Phils' offense. He allowed only two singles and four baserunners while facing 29 batters two greater than the minimum.

The fact that Sanderson was all but unhittable may come as little solace to Lerch, who saw his record drop to a dismal 2-10 despite a five-hit effort that would've won on any other night. Lerch pitched all nine innings, yielding the game's only run when Andre Dawson bounced a seeing-eye RBI single to right field.

"Randy showed the same type of intensity and drive that he had in the LA game (a 10-inning no-decision against the Dodgers)," said Green.

ADDED CATCHER Bob Boone: "He throws like that the rest of the year, he'll win a lot of games. He had great command of his pitches all night."

Lerch's lone lapse came in the fifth when Chris Speier opened the inning with a single to left Sanderson followed with a perfectly-placed sacrifice before Lerch induced Ron LeFlore to bounce to Schmidt for the second out.

Lerch might have gotten out of the inning unscathed had he not walked Rodney Scott, a .223 hitter going into the game. Dawson's ensuing single to right was weak enough to give Bake McBride an opportunity to get Speier at the plate. McBride's throw, in fact, was in time. But it short-hopped Boone, who lost control of the ball as he attempted to tag the sliding Speier.

"IT WAS off to the side, but I had the plate blocked," said Boone. "When I swept my arm, I hit the toe of his foot and it hit right on the ball."

The game was merely minutes old when 3 1,696 fans in Veterans Stadium saw shortstop Larry Bowa pull up lame after attempting to field a grounder in the hole by Dawson. Bowa pulled his right hamstring muscle and had to leave the game. He may be out of the lineup for a week.

Indeed, it was not the Phillies' night. Pete Rose greeted Sanderson in the home first with a line single on an 0-2 pitch, but that was the last hit the Phils would get until Manny Trillo opened the eighth with a base hit.

SANDWICHED in between were two other baserunners. Garry Maddox reached first on an error by third baseman Ken Macha with one out in the second. But he was eliminated when Ramon Aviles, Bowa's replacement at short, hit into a double play.

The second runner was Schmidt, who walked on a 3-1 pitch with one out in the seventh after Sanderson had retired 14 straight. Del Unser, playing in left field in place of the ill Greg Luzinski, followed with a drive that right fielder Bob Pate had to run down on the warning track.

With two out and Trillo the hitter, Schmidt stole second and went to third when catcher Gary Carter's throw went into center field. Trillo fouled off Sanderson's next pitch. Then, in a daring move Schmidt attempted to steal home.

SCHMIDT WAS out in a close play only because Sanderson had the presence of mind to throw a fastball inside, a spot from which Carter could easily make the tag.

"If he had thrown a curve ball or a high fastball I would've been safe," said Schmidt.

Trillo, ironically, returned to the plate to single in the eighth. Maddox moved him to second with a sacrifice, but pinchhitter Greg Gross fouled out and Boone flied to left, ending the Phils only other scoring opportunity. 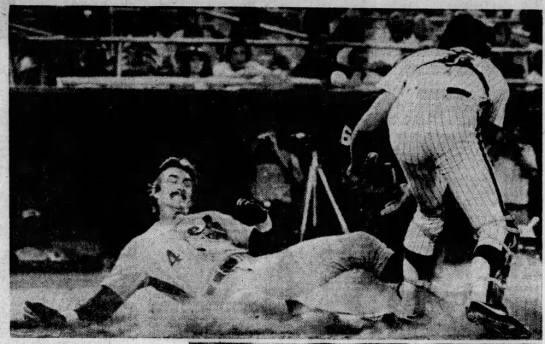 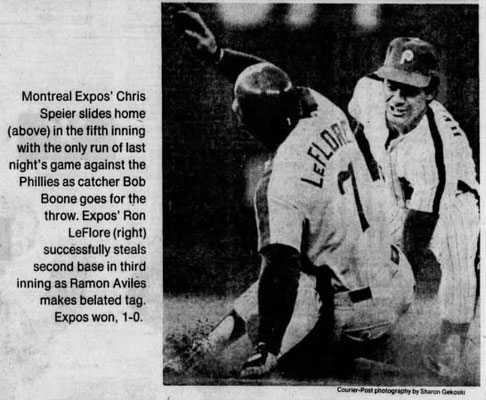 Schmidt’s big gamble was worth the effort

PHILADELPHIA – Attempting to calculate the odds on successfully stealing home might be likened to figuring pi to the 29th place. Neither exercise has much practical use. It does not, however, take any mental gymnastics to reach the conclusion that stealing home is a longshot proposition at best.

The play is seldom seen east of Oakland, where Billy Martin has his A's trying to steal home every other game or so. But last night Mike Schmidt took the gamble for the Phillies, attempting to pilfer the plate against Montreal's Scott Sanderson.

Schmidt's daring piece of baserunning came in the seventh inning after he had walked, stolen second and continued to third when catcher Gary Carter's throw bounced into center field. Sanderson had permitted the Phils nothing but a leadoff single in the first by Pete Rose and, if the odds on stealing home were long, the chances of the Phillies getting another hit off Sanderson seemed equally slim.

With two out and a 1-1 count on Manny Trillo, Schmidt rolled the dice, boldly sprinting for the plate as Sanderson delivered his pitch to Carter, who tagged Schmidt for the third out. Umpire Dutch Rennert's call was close enough to be disputed, a point that will be overlooked by today's boxscore.

The fact is, in what would end a 1-0 loss, Schmidt's attempt to steal home was the closest the Phillies came to generating a run off Sanderson, who finished with a brilliant two-hitter. The Phils' final hit was an ironic one, coming as it did off the bat of Trillo op Sanderson's first pitch of the eighth inning.

Despite the single, nobody in the Phillies' clubhouse was second-guessing Schmidt last night.

"It was," said Manager Dallas Green, "a helluva try. He got a good jump and I thought he had a shot at it. It didn't look like we were going to get any hits, that's for sure.

"That's the type of baseball we want to play. We've bad enough trouble convincing people who can run to run. Mike, to me, is a very instinctive baserunner. He knows his own abilities and usually stays within them. I have enough faith in Mike and Mike's judgment to go with him. It's a surprise thing and a thing that usually turns a game like this around."

Actually, all Schmidt really had going for him was the element of surprise, a formidable weapon if used at the right moment. And this moment seemed, in every respect, correct.

"There were two outs, we needed a base hit to score, he (Sanderson) has the big windup... It was the perfect time," said Schmidt.

Indeed, Sanderson, Trillo and 31,696 Veterans Stadium patrons were caught completely off guard when Schmidt broke toward home. But the young righthander remained composed and threw the only pitch that could possibly have gotten Schmidt out – an inside fastball.

"I didn't know he was coming until somebody yelled," Trillo said. "If I swing, I might hit Schmitty. I tried to give a fake (bunt), but no way was I going to swing."

"I didn't expect it," Sanderson said. "I saw him going, I knew he was going. A lot of runners fake stealing home hoping to make a pitcher balk, but I knew he was going after the second or third step. I kept the same motion. It was a fastball up and in to get Trillo out of the way and Gary was able to make the tag.

"I'm surprised they tried it in a 1-0 game, but you have to do something I guess."

Which was exactly Schmidt's thinking when he told third base Coach Lee Elia that he wanted to steal home.

"You got to try something when it's 1-0 and the guy's throwing a one-hitter," said Schmidt. "The only thing he can do is throw a fastball. Anything else, I'm safe and we're still playing. He (Ren-nert) could've called me safe as it was. I thought I got the front of the plate. The replay showed I might have been out, but the call could've gone either way."

Had the call gone the Phillies' way. Schmidt today would be the toast of radio talk shows. As it is, the play no doubt will be the subject of much backyard debate, the pros admiring Schmidt's effort, the cons pointing out that the loss column is filled with good intentions.

There's no doubt Schmidt's dash to the plate was a high-risk venture, a bucking of the odds with little hope of success. Nevertheless, it was a gamble well worth taking.

Noles, who began serving the suspension yesterday, tossed a bat and helmet in the direction of umpire Joe West June 17 in Los Angeles. Feeney announced a $500 fine and the suspension Tuesday, Noles appealing through the Major League Players Association.

"I was," said Noles, "upset when I heard about the suspension. But after talking to several people the last two days, I decided to drop the appeal and get the entire thing over with."