The one-time relief great of the Cincinnati Reds started learning it about a year ago. It was ineffective at first, but gradually he began to get batters out with it.

Now, the split-finger fastball is Rawly Eastwick's best pitch. In fact, he uses it too much.

This may come as a shock, but Manager Dallas Green said Eastwick was impressive because he did not rely on the new pitch as much.

"He has to use other pitches. We have been working with him all spring and encouraging him. I thought he did it very well today. He's throwing better right now than I remember him throwing last year. I think that's an approach. We have talked about going after bitters. He looked a little lethargic at times last year. He seemed today like be was coming at guys."

Green says Eastwick needs a little Pete Rose in him.

"Pete goes after pitchers; it's a battle between him and the guy on the mound and everybody knows it," said the manager. "There has to be a battle between the pitchers and hitters; that's what makes the game so great. Rawly showed me today he is doing that."

Rose, of course, does not stop with pitchers. He made yesterday's Grapefruit League game exciting for the 2.755 fans who sat through showers in the early innings before the sun broke through the overcast.

Peter Edward had three singles in four at-bats to raise bis spring average to .SJ4. After the Orioles took a 2-0 lead against Noles on Ken Singleton's home run in the first liming, the Phils had runners on first and second, one out and Greg Luzinski the batter.

Luzinski doubled to left-center and the throw beat Rose to the plate, but Pete crashed into catcher Floyd Rayford, jarring the ball loose. Not only did Rose score, but Bake McBride, wbo was on first, also crossed the plate to tie the game.

In the second liming. Rose singled home Larry Bowa from third and in the seventh, aggressive base running caused the Orioles to throw the ball away attempting to get Pete it third. When the ball bounced away from third baseman Doug DeCinces, Rose trotted home with the sixth run.

"Pete makes things happen," said Green. "People say. Why is he doing that?' Then, all of a sudden the ball gets away and be scores. That's why be does it It's only spring, but he plays the game the same all the time."

Aside from the standout pitching and Rose's antics. Green was pleased with catcher Bob Boone, wbo caught seven innings.

"I really didn't want him to go that far, but everything seemed to be OK with him,” said Green. "He wanted to bat in the seventh inning, so I let him stay in there."

Boone is recovering from ligament surgery last September and still has some problems squatting. He proved yesterday the Phils have little to worry about in that department.

EXTRA POINTS – The Phils won the morning "B" game over the Mets 4-2... Nino Espinosa, bothered with a sore shoulder, pitched two innings... He allowed a run and gave up two hits... Although Green was not too pleased with Nino's performance (he did not throw hard), the pitcher said his shoulder felt good... He also revealed he has changed his motion somewhat, making his windup more fluid... It's still doubtful Nino will go North with the team... Dennis Martinez started for the Orioles, but was forced to leave after two innigs because of soreness in his arm... Lerrin LaGrow set the Orioles down in order in the eighth and ninth. 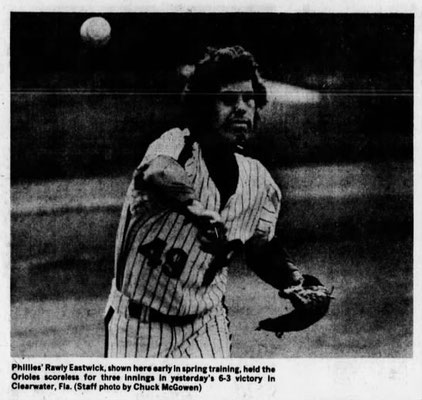 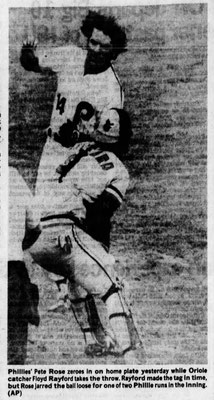