PHILADELPHIA – Even as the fastball went whistling past his face at better than 90 mph, Dick Ruthven knew that it was not Houston flamethrower Nolan Ryan's intention to do him bodily harm. He didn't think it the second time it happened, either.

But, that still didn't stop the Phillies' righthander from picking himself out of the dirt and angrily ripping a Ryan fastball for a rally-igniting double that sent the Phils on to a 6-4 victory over the Astros last evening.

The four-run uprising in the fifth inning at Veterans Stadium was highlighted by two-run singles by Keith Moreland and Garry Maddox, thus enabling the Phils to win the season series with the West Division leaders. The 9-3 record was the Phils' best against the Astros since they were 11-7 in 1967.

IF THERE was an irony to this year's finale, it was the fact that in contrast to Ryan's blazing fastball, Ruthven was throwing marshmallows. And, he knew it.

"As far as velocity goes, I felt like a girl out there oh the mound," said Ruthven, who has used his pitching adaptability to post a 10-7 record. "I didn't have a thing tonight."

That may be true, but sometimes it's hard to tell with Rufus. He blanked the Astros for three innings before two walks during a momentary loss of control set up Craig Reynolds' two-run single in the fourth inning.

"Yeah, but Ryan didn't have his breaking ball. He couldn't get it over the plate," said Phils' Manager Dallas Green, who watched his team score a pair of runs in its half of the inning to knot the score at 2-2.

BAKE MCBRIDE played the instigator, opening the frame with a single to hike his current hitting streak to nine hits in his last 10 at bats. He's hit in seven straight games and has batted safely in 19 of the last 20.

"The man is playing with bad knees and a bad hip, but he wants to play," said Green. "We've asked him about it, but he hasn't backed off for a second."

Mike Schmidt, who would leave the game the following inning with a pulled groin muscle, followed Bake’s hit with a walk, McBride scoring on a single to center field by Maddox and Schmitty crossing moments later when Manny Trillo doubled down the right field line.

Unfortunately, the rally ended as Maddox was an easy out trying to score from first base on the latest contribution by Trillo's sizzling bat. Should Garry have been sent home?

"WE'VE BEEN having trouble scoring runs. And, you don't score guys by hoiding them up at third," said Green. "That's called the running game."

Such daring was to pay off in the fifth inning. And, none too soon, since the Astros used a single by Jeff Leonard, a two-base throwing error on a pickoff attempt by Ruthven and a single by Joe Morgan to take a 3-2 lead in the fifth.

Ruthven was the leadoff hitter in the Phils' half of the fifth. He'd already been down in the dirt once. He wasn't happy about that even though he knew Ryan wouldn't be throwing at a pitcher without cause. Especially not in a close game.

"Still, it scared the hell out of me. I'm lucky to still have a face," he recalled. "When I went down for the second time in the game, I got up fuming. I do that. It's just reflex with me.

"I FIGURED the only satisfaction I could get was to take him (hit the ball) deep. When I hit that ball to right field, I was hoping it would make it to the wall."

It didn't, but the Phils were rising up again. Pete Rose and Schmidt walked to load the bases and Moreland, starting in place of Bob Boone, lashed a single into right field.

Ruthven and Rose scored, Pete using a slick, wide slide to avoid the tag of catcher Alan Ashby, who had to be physically restrained from going after plate umpire Fred Brocklander when he gave the safe sign.

Schmidt pulled a muscle while running on the play and was replaced by John Vukovich.

"WE DONT know how serious it is," said Green. "Mike jogged off the field, so it might not be that bad. We'll know better tomorrow."

Maddox followed with a two-run single off reliever Bert Roberge and the Phils were ahead to stay as a crowd of 31,342 watched Ruthven hurl two hitless innings before turning the final two frames over to an effective Tug McGraw. 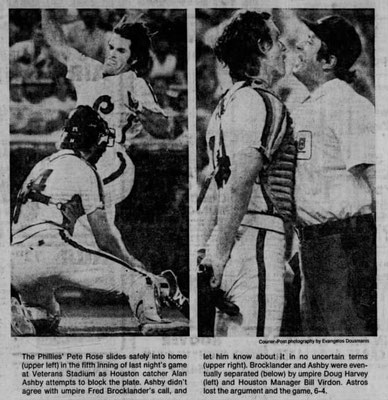 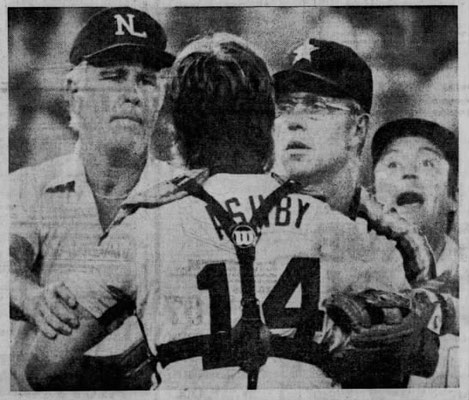 Moreland and Boone helping one another

PHILADELPHIA – If he had to wager on which Phillies' catcher is going to make his presence felt in the weeks ahead, Keith Moreland would pick Bob Boone.

"I'd bet my salary on it," said the rookie backstop, who thinks that anyone who believes there is some sort of job competition between the two of them should have his head examined.

"I think that kind of thing is a farce. It's being blown way out of proportion," said Moreland after singling home the tying and winning runs in the Phils 6-4 victory over the Houston Astros at Veterans Stadium last night.

Comparisons are, of course, inevitable. Especially since the youngster is sizzling at the plate with a .333 batting average while Boone, who is coming off knee surgery, has been battling to fatten his .222 average.

Moreland caught righthander Dick Ruthven' for the first time last evening. And, people are wondering if it's just a matter of time before he's behind the plate when Steve Carlton takes the mound.

"I don't want to get into that!" said Manager Dallas Green. "I'm just going with the way I feel. The reason Keith played tonight doesn't need a lot of explaining. What's he hitting? At the moment, one guy is swinging the bat better than the other."

Green has always insisted that if the Phillies hope to win the division, they will need to have Boone behind the plate, with Moreland adding his batting strength to the bench.

But, that thinking was based on the belief that Moreland would have trouble defensively and that Boone's handling of the pitching staff and knowledge of opposing hitters could not be sacrificed.

That may hold true over the long haul, but there is little doubt that Moreland is improving behind the plate and may prove to be a challenge to Boone whether he likes it or not.

"If I'm getting better as a catcher, a lot of the credit has to go to Bob," said the youngster from Dallas. "He helps me with everything I ask him about. Even during the games, he'll explain to me his thinking on certain pitches and situations.

"There's no way I can do the job with the pitchers that Boone does. He's the guy who is going to come on and take us all the way. I'm a backup catcher. And, I'm just fortunate to be playing behind a guy like Bob."

It's entirely possible that an injury, such as the pulled groin muscle Mike Schmidt suffered last evening, might tempt the Phils to get Moreland's bat into the lineup by playing him in the infield. He's been working out at both first and third base.

The truth is, however, that Keith's stock as a defensive catcher is rising sharply.

"We've been in almost every game he's caught. So, I don't think you can fault his defense," said the manager. "And, up until tonight when our number-four hitter (Schmidt) got hurt, I thought we had a guy (Moreland) to fit into the number-five slot."

With Greg Luzinski out of action with knee problems, it's imperative that the Phils keep a strong hitter with longball potential batting behind Schmidt. Otherwise, Mike isn't going to get many good pitches to hit.

But, these are temporary measures. It's no secret that the success of Lonnie Smith in left field and Moreland at the plate have given birth to a feeling that the youngsters may prove to be the salvation of the team.

"No," says Moreland. "The starting eight (veterans) has got to pull the load. The rookies are having a lot of fun aiding the cause. But, to start talking about competition for jobs... that's ridiculous.

"We want to win. We're working together. If the young guys do well, it's a plus for the organization. It helps us establish ourselves like the veterans had to do. We're fortunate Dallas has used us. But, we've made mistakes. I almost cost us a run tonight on a passed ball."

That may be true. But, when Dick Ruthven came off the mound after working with Moreland for the first time he could remember, he praised the rookie for adjusting to a pitching style that he describes as one of the most difficult to comprehend.

"After eight years, Boonie has me down pat," said Ruthven. "The difference between what Bob does for me and what Keith tried to do tonight could have been huge. But, it wasn't. It was minuscule. I think he's a darned good catcher."

Kovar, who was drafted in the 10th round by the National League club, had two years of eligibility in both baseball and football. The 5-9, 185-pound defensive end is to leave tomorrow for the Phillies' farm team in Helena, Mont.

Kovar led the Mustangs' defensive unit in total plays during the 1979 season and was one of the Southwest Conference team's leading tacklers.