PHILADELPHIA – Mike Schmidt is well versed in all the nuances of the word "streak." He has travelled its uneven path before, ridden its momentum when every swing seems magical, languished in its limbo when every at-bat seems an exercise in frustration.

So you'll have to pardon Schmidt if he seems reluctant to accept the role as the Phillies' current hot bat. Sure, his two-run home run in the first inning sent the Phils on their way to a 6-3 victory over Pittsburgh and back into first place. Certainly, it was his 14th homer of the year – 10th in the month of May.

But, as hot a power hitter as Schmidt has been, he has tended to minimize the tear because, perhaps, he is weary of the adjective "streak" being used to qualify his hitting.

"I DON'T know, he said. "I guess I've been a streak bitter in the past. I've just been taking a good swing at the ball. When I get ahead of the pitcher, I have the liberty of waiting for the fastball and I'm taking a good, controlled swing at it. It has been that way all year. Call it a streak if you want."

Let's instead call it the most consistent start of Schmidt's career. After hitting over .300 for the month of April, Schmidt has kept his batting average hovering near that mystical plateau and went into this afternoon's series finale with the Pirates hitting .297.

That may not seem remarkable until you consider that fully 26 of Schmidt's 43 hits have been for extra bases; that he leads the National League in home runs and runs, and is second in RBIs with 36 24 coming in May.

"IF YOU don't have a year or two under your belt hitting .300, they're going to call you a streak hitter."

Schmidt's homer, which gave him 99 total bases in 38 games, came after Pete Rose had greeted Pirate starter Don Robinson with a double. Bake McBride, another who has consistently driven in runs, followed with an RBI single before Schmidt sent a Robinson fastball careening off the façade bordering the upper deck in left field.

Presented with a 3-0 lead, lefthander Randy Lerch broke a season-long attachment with ill fortune and gave the Phillies eight strong innings. He gamely survived the first of two home runs by Lee Lacy and pitched superbly out of a two-on, no-out jam in the eighth.

“I promise you I will not say this was a typical Randy Lerch game," smiled Phillies Manager Dallas Green, "But it was a helluva pitched game."

LERCH relinquished Lacy's first homer with two out in the second, which made it a 3-1 ballgame. But be got Bill Robinson to hit a double-play ball after Dave Parker had singled in the fourth, and retired Omar Moreno to end the fifth after falling behind the Pirate leadoff man, 3-0.

"That (the 3-0 lead) was a big edge," said Green. "It allowed him to relax that much more. The key to the whole game for Randy was him getting Moreno after going 3-0. That, to me, was the key for Randy because it came at a critical part of the game."

By then, the Phillies had gotten Lerch, whose last win came against the Pirates in September of 1979, two more runs on RBI doubles by Rose and McBride. And Lerch cruised along with a 5-1 advantage until the eighth, when he gave up a single to pinchhitter Manny Sanguillen and a double to Moreno with Tim Foli, Parker and Robinson still to hit.

BUT GREEN stayed with Lerch and he responded by getting Foli and Parker on ground balls, and striking out Robinson.

All that remained – after Lerch scored Larry Bowa with a suicide squeeze bunt in the eighth – was for Lerch to get through the ninth. He did not, giving up a leadoff single to Bill Madlock and Lacy's second homer. Ron Reed, with some fancy defense at first by Rose, got the final three outs for his second save of the season.

PHIL UPS – Phillies righthander Larry Christenson underwent successful surgery by Dr. Phillip Marone at Methodist Hospital yesterday... Dr. Marone removed some bone spurs and loose bodies from Christenson's right elbow... The Phillies are not ruling out a September return for Christenson... Greg Luzinski was named major league player of the week by a national sports publication for hitting.545 with five homers and eight RBIs last week... Phils lead National League with 76 doubles, 201 runs and 38 borne runs… Phils have won 11 of last 15 games... Final game of homestand was to have begun at 12:35 this afternoon with Dick Ruthven opposing Eddie Solomon. 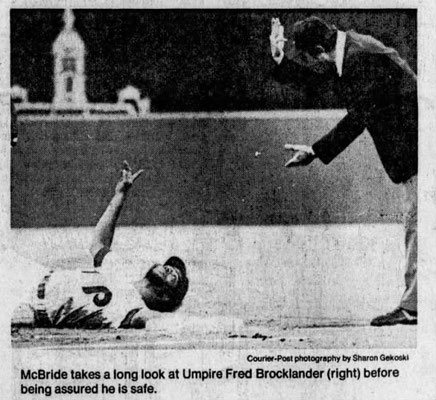 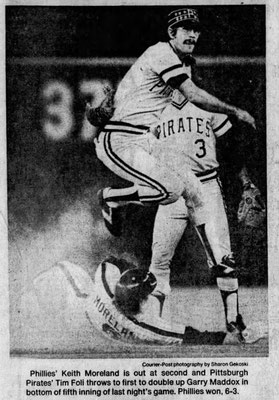 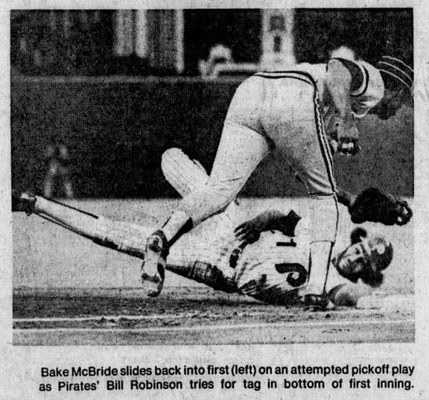 By Ray W. Kelly of the Courier-Post

PHILADELPHIA – Have you checked your demeanor lately?

No, don't ask the gas station attendant to do it. Just look in the mirror. Demeanor is your cool, the way you carry yourself , the vibrations you give off and the image you present to others.

It is also, as Phillies southpaw Randy Lerch discovered last evening, a potent tool of the pitching trade. Especially in the major leagues, where a 95 mph fast ball can make a batter smile with glee if it's delivered like an apology.

Call it "ESP" or translating body language, but Phils' Manager Dallas Green suspected that opposing batters were continually getting the impression that in an eyeball-to-eyeball confrontation, Randy would be the first to blink.

"I like aggressiveness rather than back-off-ish-ness," explained Green. "Other teams pick up on that and pounce on a pitcher who gives that impression."

Understand that the manager wasn't questioning the degree of Lerch's toughness. He thinks Randy is tough enough. He knows the lefthander has talent enough. The idea is to convince the hitters that he's twice as tough and talented.

It isn't easy being cocky when you haven't won a game since last September. "Any guy who has any pride at all... to look up at the scoreboard and see that your record is 0-6... it's positively degrading," said Lerch.

Fortunately, the lanky southpaw had some extra motivation in his hip pocket last night as he prepared to string eight impressive innings together while beating the dangerous Pittsburgh Pirates 6-3 at Veterans Stadium.

He was hungry for a victory. He was angry about suddenly becoming the invisible man of the pitching staff. He was sick of trying every pitching remedy that came down the pike. He was short-tempered about not having time to prepare mentally for the starting assignment. And he was happy that Dallas Green wasn't Danny Ozark.

The new manager may touch a nerve or two when he talks about Randy's lack of "enthusiasm," a word that Lerch believes should be swept off the floor of a riding academy. But Green isn't as quick to give up on people as Ozark.

"Are you kidding?" said Randy. "If Danny was still here, my chances of pitching would have been cut in half. That's part of the problem. I spent so many years worrying about what Danny was thinking... whether he was going to take me out of a game or not let me pitch because of one mistake. I got into the habit of concentrating on the wrong things."

There was nothing wrong with the way he handled himself against the Pirates. And Randy insists that he was simply being himself, the real Randy Lerch.

"I'm not going to go out there and act like Al Hrabosky (The Mad Hungarian)," he said. "I'm going to be me. If that's not good enough, then get someone else. I was myself tonight.

"Yes, I was more aggressive. Instead of trying not to give up hits by throwing perfect pitches, I went out there saying, 'you're not going to hit me.' During that one inning, I realized you can't strike out Tim Foli, so I didn't try. I went hard at Dave Parker. I let it all hang out against Bill Robinson. And, it. worked."

What worked was Green's approach to Lerch. He ignored him, dropping him from the starting rotation and sending him to the bullpen, where the coaches just answered his questions with shrugs and talked about the two new pitchers just recalled from the farm team.

"I'll admit, I felt unwanted. I felt like I was dead weight. With the trade deadline coming up, I thought maybe they were using me as an insurance policy," he said.

"Maybe it helped me. The pressure was intense because of the Oh-and-six. I had to get away from the heat of the fire."

That was Green's intention all along. He had seen that "oh no!" look on Randy's face whenever a bloop hit fell in or something else went wrong. He was certain the other team also picked up on it and attacked like sharks in bloody water.

Last night, Lerch acted like the master of his fate. And sure enough he was. Green called it working like a professional, but cautioned against celebrating the salvation of the pitching staff.

"It's not important unless he can back it up (with similar performances), said Dallas, who has all kinds of demeanor.

De-closer anyone gets to being satisfied with himself, de-meaner he gets.