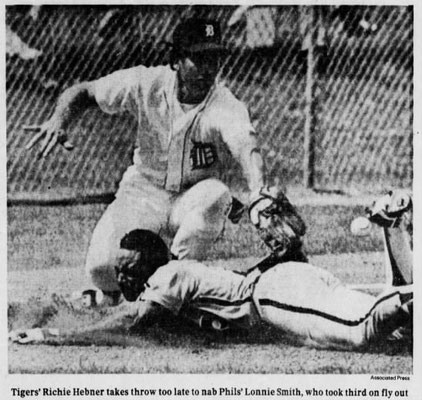 LAKELAND, Fla. - Mark Fidrych was one out into the third inning against the Phillies yesterday when he stepped off the mound, waved for the trainer and headed for the dugout.

The Detroit Tigers righthander, who hasn't pitched a full season since 1976, said he had a stiffness in a triceps muscle he had never felt before.

"I'm very disappointed, but I'm not going to get discouraged," said Fidrych, who was rocked for five hits and four tuns in his 44-pitch stint. "It's nothing like the pain I had before. But it could be anything. It could go away. I'm just going to keep on playing. I just hope the Tigers will let me keep hanging around."

CLEARWATER, Fla. – It was a Saturday afternoon, nearly two weeks ago. Warren Brusstar stood on a pitcher's mound, cracking hard slider after hard slider in a batting practice in which the batters were not having much fun.

Phillies pitching coach Herm Starrette leaned against the cage and watched for a while. It had to be a mirage, Starrette figured. He had been waiting for this sight for so long that it now he was having trouble believing it. '

Finally, Starrette called Dallas Green over to provide some corroboration that this was, in fact, real.

“Dallas looked at me, and he said, 'Herm, he looks as smooth as he ever was,'" Starrette said. "We were both encouraged, you know.

“And now, all of a sudden, this tling crops up again."

It turned his season last year into a horror show of pain and false hopes and a whole lot of sitting around. Now it has come to interrupt this, his new spring, his chance to ease back to health and again become the Phils secretary oi middie-inning affairs.

The knot in his shoulder was back. And Brusstar sank into a depression that hurt worse than his arm.

"I just figured it was the same problem, Brusstar said yesterday, after rest of the team had left him behind to sit in an empty locker room at Jack Russell Stadium. "I figured it wasn't going to go away."

Well, the pain in 4xfew days of rest, trainer Don Seger virtually massaged it into invisibility. It hasn't been back since.

But that is today.

"What it does after today," said team physician Phillip Marone, "well, that I can't say."

Brusstar theorized yesterday that his latest problem was nothing a little Rustoleum wouldn't cure. After all, he had barely pitched in a year. And like a golf swing or a batting stroke, a pitcher's motion needs constant tuning.

"I think I was having trouble with my mechanics," he said. "The first three or four times on the mound, I felt pretty awkward."

An awkward motion means doing awkward things with your arm. And it was those awkward things, Brusstar says, that caused this latest setback.

So now he is back to the rebuilding program. First, they let him throw only against a wall at Carpenter Complex, away from where the crowds would see him. Then he. threw off a three-inch mound. Wednesday, he threw off a six-inch mound.

"I threw better Wednesday than I had all spring," he said. "Mechanically, I was a lot more together. And as far as any pain, there was very little. It was just on a couple pitches where I didn't close my front side right. That's the only time I get it.... I'm pretty optimistic now."

But he has been optimistic before. A hundred times. Even his pitching coach is wary now of sounding too optimistic. And he suspects even Brusstar's optimism is sometimes a false front.

"After he goes out there two. or three times and does OK, then we'll feel like he's over the hump," Starrette said. "But until that time comes, I think he's going to be concerned about it.

"I know he's probably worried. The only thing I've tried is to keep his spirits up. But that's not an easy thing for me to tell him. He's going to have to keep himself from losing faith in himself.

"I keep reminding him about Tommy John, how someone like that went through this for years, not knowing whether he was ever going to pitch again.... But one thing is that age is in his favor. If he were 35 or 38, it would be different. But he's young (28) yet. And young guys always have a chance to heal."

Brusstar knows he feels a lot stronger than he did last April, when there were times he could barely lift his arm. But yet, there is still the pain and still the doubts. And so his future remains a massive unknown.

A lot of the possibilities aren't good ones. No one has to tell him that. But for now, Warren Brusstar is just refusing to accept the notion that every time he cranks it up and throws hard again, the pain in his shoulder will return.

"There's always that possibility," Brusstar said. "But I don't let myself worry about it. I'm just going to take it one day at a time. As long as I'm physically able to throw every day, I'm satisfied with that. I know the problems might come back. I just try not to think about it."

NOTES: The Phillies hammered the Tigers, 10-4, at Lakeland yesterday. Keith Moreland had three hits, including a single that started a four-run second inning and a one-run homer in the fourth. Pete Rose whacked a bases-loaded double in the second off Detroit starter Mark Fidrych.... The Phils continued to get excellent pitching from rookie left-handed screwballer Carlos Arroyo (3⅓ innings, 2 hits, 0 runs) and their new reliever, Lerrin LaGrow (two shutout innings).... Paul Owens says he is convinced the Cubs will definitely deal away Bruce Sutter. But he denies the Phils are close to a trade for Dave Winfield. "I haven't even talked to them (the Padres) since the winter meetings," Owens said.

Where Tug is, laughter is

BELLEAIR BEACH, Fla. – The morning workout over, they were fishing in the gulf behind the Surf Apartments. Tug McGraw and his son Mark, 7, were there. Also Garry Maddox and his dad. And Randy Lerch.

That very morning McGraw had bought the fishing poles. Now Randy carefully baited the hook at the end of his and cast away. Whoops. The front half of the pole followed the hook, the bait, the line into the rippling, blue water, leaving Lerch holding the handle and swearing softly to himself. He stood there, what was left of his new fishing pole in his hand, and stared darkly at the gulf.

"He looks like he's waiting for it to leap up out of the water back into his hands," Maddox told his father.

"Hey 'Blade,'" hollered McGraw, unable to keep a straight face any longer. "If I go in after your pole and find it for you do I get a save?"

Lerch glowered at him. "If you do," he shot back, "that'll be the first save you got for me in a long time."

And then they all laughed.

That's the beauty of Tug McGraw. Laughter follows him around... to the clubhouse, to the mound, to the beach behind the Surf Apartments, wherever he goes.

He may get carried away at times with his carefree, outgoing, fun-loving approach to life, and he may speak a bit too frankly for some.

Surely, his manager for the last five years, Danny Ozark, wasn't too thrilled to read some of the criticism Tug has thrown his way in recent weeks. But, as Danny said, "That's Tug. Even when we had a couple of club meetings he kind of said too much instead of shutting up... and got himself in hot water for it. Tug is that way. Tug will always be that way."

I certainly hope so.

How can anybody stay angry at Tug McGraw? Underneath all the wisecracks, all the outspokenness, beats the heart of a little boy.

Baseball may be a job to some. To Tug, it remains a game, no matter how much they pay him to play it. He brings enthusiasm, joy, fun to the game – and the game, mired in labor negotiations this spring, has never needed it more.

"That's the thing about playing ball," Tug said yesterday. "Once you get on the field there's not a problem in the world. Baseball is the only thing I can say that I've been able to just totally enjoy, really go out there and have a good time. I dunno. It's just fun throwing a baseball."

It is, if you're Tug McGraw. Only Tug could warm up at the Phillies' minor league complex in front of dozens of spectators, throw one of the juiciest of all home-run pitches known in the trade as a "backup slider" turn and announce to the crowd in a voice filled with excitement, "That's the grand-slam pitch. That was it, right there. And you saw it in person."

He has the ability to laugh at his own mistakes, as well as point out others' mistakes. Even when it hurts.

"There was a time last year when things were really tough," he admitted., "I'd say the toughest was the fourth grand slam, the Ed Ott one. It came at a time when I was mentally tired. I was confused about a lot of things – the way the club was playing, the way the pitching staff was being used. Everything seemed to be in a shambles.

"The reason it was so tough, there was no light at the end of the tunnel. I was totally disenchanted with the way the bullpen was being handled. You know how Danny was – go with the hot hand. After a while you get to the ballpark insisting you feel fine when your arm is really dragging, pop three or four aspirins before you go down to the bullpen just so you can loosen up. You get mentally tired, and you don't see any relief in sight – no pun intended. Then you give up another grand slam, and another home run...."

But that's all in the past. Now there's a new Phillies manager, Dallas Green, and he was a pitcher.

"He knows what it's like being there," Tug said. "Just coming to spring training this year knowing that, thinking, 'Hey, someone here knows how to handle a pitching staff,' you couldn't wait to get down here to get started. That was the light at the end of the tunnel you were looking for."

And Tug McCraw is the light side of the game, the fun side we're all looking for. Win or lose, a backup slider that lands over the right-field fence for four runs or a nasty screwball at the knees for strike three, he's one of a kind. Who cares if he goes a little overboard once in a while? The game needs his kind as badly as, as – well, as badly as Randy Lerch needs a new fishing pole.