Christenson luck hasn’t changed at all

CLEARWATER, Fla. - There had been a suspicion ever since spring training opened things had been going too well for the Phillies.

That ended in Lakeland yesterday when hard-luck pitcher Larry Christenson was drilled below the left knee by a screaming liner off Jason Thompson's bat in the third inning.

The Phils continued their lusty hitting as they ripped Mark Fidrych and his Detroit teammates 10-4, but the Christenson injury took all the fun out of their fifth victory in seven Grapefruit League games.

The instant the ball struck the tall righthander, he crumbled to the mound at Marchant Field. Moments later, he was taken from the field on a stretcher and rushed to a hospital where X rays proved negative.

As the team prepared for the bus trip back here, however, two players had to carry him onto the bus.

"He is not on crutches," said Dr. Phillip J. Marone, who examined Christenson last night. "He has what amounts to a very deep bruise on the inside of his left knee. I would estimate he will not be able to pitch for from five to seven days."

"I guess I am lucky," said the injury-plagued Christenson. "If it had beery little bit more to the left, it would have hit the center of the kneecap. Everybody says it would have shattered.”

Christenson, 26, has been hampered by injuries most of his five-plus years in the majors. Last season he was one of many pitchers who went down, leading the parade when he fractured a collarbone during a February benefit bicycle caravan in California.

He did not pitch until May 12 and after returning, went on the disabled list July 3 with a severe groin pull. And on Sept. 17 he underwent surgery for the removal of a bone spur on the collarbone.

"L. C. has certainly had some bad luck," said Green. "Seems like he gets over one thing and something else happens."

"It hurt so bad at first I couldn't even talk," said Christenson. "I know it's going to be stiff tomorrow and is going to put me a week behind in my preparation."

Prior to yesterday, he had pitched three strong innings, allowing no runs and three hits.

"I felt like I was on schedule," said Christenson. "After last year, I was determined to contribute to the pitching staff. If it had to happen, at least it happened early enough in spring training. I still have time to get back in a good groove."

For the Tigers, yesterday confirmed the doubts they have about Fidrych. The Bird has not worked much the past three seasons because of an arm ailment. The Phils made a loser out of him and he was forced to leave the game in the third inning after throwing 46 pitches.

The Phils vaulted out to a 4-0 lead in the second inning against Fidrych as Moreland singled in a run and Pete Rose doubled in three more.

Moreland homered leading off the fourth and four Detroit errors helped the Phils pad their lead.

"You have to be impressed the way Arroyo is pitching," said Green. "He has pitched almost six innings now and is yet to give up a run."

EXTRA POINTS Former Phils' first baseman Richie Hebner bounced into two doubleplays yesterday... Lerrin LaGrow, who is being groomed to be the middle reliever, worked two innings and allowed just one hit... Marty Bystrom, the rookie pitcher who has been hobbled with a pulled hamstring, is beginning to work out again... The Phils will split their squad today, sending one team to Dunedin to face the Blue Jays and another to Sarasota to oppose the White Sox... Dick Ruthven will start against Chicago, with Jim Wright working the other game... Tomorrow, the Houston Astros come to Jack Russell Stadium, with Steve Carlton scheduled to pitch. 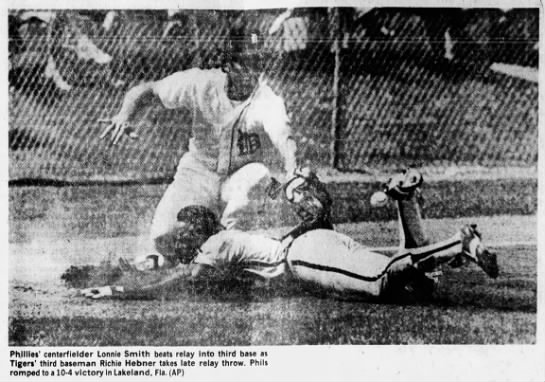 Phillies are 4-1 on the Reno line

The 1980 World Series is likely to be fought along the Southern California freeways according to odds, set by Harrah's Race and Sports Book in Reno.

The Los Angeles Dodgers are a 5-2 choice to regain the National League championship they lost last year and the California Angels are a 5-2 pick in the American League.

The defending world champion Pittsburgh Pirates listed at 7-2 behind the Dodgers, followed by the Houston Astros and Philadelphia Phillies at 4-1 each.

The New York Yankees were 3-1 picks in the American League, with the Milwaukee Brewers and defending American League champion Baltimore Orioles listed at 5-1.