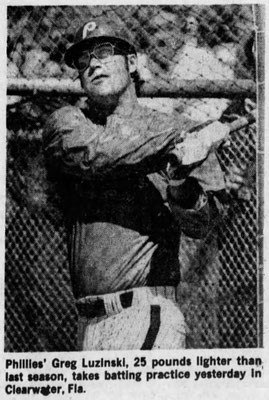 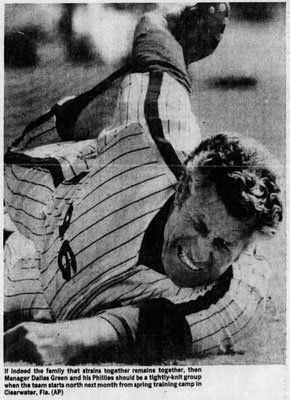 CLEARWATER, Fla. – Originally, Larry Bowa wanted some compensation, but in the end all it took was a phone call from Ruly Carpenter to soothe his hurt feelings.

"I was wrong," the Phillies' shortstop told a group of reporters before yesterday's workout. "The Phillies have been more than fair to me during my entire career and the feedback, I guess, is that I said Ruly Carpenter has been unfair to me. That is not true; I have been treated probably as fair as all the players since I have been here."

Last Tuesday morning, Bowa took a verbal swipe at his employer after learning six shortstops make more than the $300,000 a year he earns.

Apparently, when St. Louis signed shortstop Garry Templeton to a long-term contract at an estimated $700,000 per, Bowa thought it was time he investigated the salaries of other shortstops.

Yesterday, Bowa said he didn't consider Carpenter's side when he talked so freely on Tuesday.

"I didn't understand the business end of it," said Bowa. "From Ruly's standpoint, if I got more money, why shouldn't Peter Rose or Mike Schmidt or Greg Luzinski get more? He has no control over what the Cardinals give Templeton or what the Dodgers give Bill Russell. He takes care of the Phillies and he took care of me.

"You have to take the good with the bad. That's one of the drawbacks of a long-term contract Nobody knew when I signed (through 1982) that the escalation would go to $600,000 or $700,000 a year for shortstops. As Ruly said, Concepcion and I have probably done the most at shortstop the last 10 years, out are probably the lowest paid. That's not Ruly's fault and that's not the Reds' fault. When we signed our contracts, we were up there."

Carpenter, who talked over the phone from his Montchanin, Del., home nearly two hours on Thursday night, was pleased with Bowa's reaction.

"He just didn't understand our side of it," said Carpenter. "I didn't tell him to hold a press conference, he did that on his own. I was pleased with his remarks, though."

"Ruly said to just let the whole matter die," added Bowa. He took a lot of heat over the story and I felt that if I have hurt him, I should try to remedy it I was wrong.

"Look, the salary I am making is not a pauper's salary. I don't have to worry about my next meal. I have no intentions of renegotiating or sitting down and asking for more. I signed a contract and I will honor it."