The season had moved into August, and after months of sparring, a division title was out there for the taking. At long last, the baseball season had a series of import. It had a set of games that truly meant something. There was, finally, some baseball to be taken seriously.

But as the days of the weekend passed, one thing became clear. The Philadelphia Phillies are very difficult to take seriously.

This, it became obvious over the weekend, is a baseball team that cannot look the Pirates in the eyes and play respectable baseball.

They tarn to putty or jelly or worse at Three Rivers. Their nadir came yesterday as a crowd of 37,323 watched th Pirates score 7-1 and 4-1 wins to sweep the series aid give them 15 wins in their last 20 games against the Phillies in Pittsburgh. The sweep also extended the Pirate winning streak to seven games.

Solid pitching, timely hitting and an opponent that could not play the game on a championship level combined to forge the wins that moved the Pirates into a first-place tie with Montreal and which left the Phillies six games back and in danger of never returning to the race.

For starters, Jim Bibby nicely spaced eight hits, a performance which now makes people think twice before chuckling when Chuck Tanner calls his ace "as good as any pitcher in baseball." For seconds, Don Robinson, who is forever getting over injuries, went seven innings before accepting relief help from Grant Jackson and Kent Tekulve.

Robinson had no ill effects from his left groin pull, which is not to be confused with his right groin pull of last month or the shoulder surgery of last winter.

"The last thing anyone thinks about the Pirates is our pitching. But the depth of our staff has been the most important thing for us."

The Phillies' ineptitude helped, but Bibby could have done it practically alone in the opener. He raised his record to 14-2 and has an excellent chance of winning 20 games.

"I threw the ball well and had good location," said Bibby, who walked three and struck out five. "I got a little tired late in the game. If we hadn't had the big lead, I might not have got the complete game."

Bibby had that big lead because of a three-run double by Tim Foli in the sixth. Philadelphia Manager Dallas Green chose to intentionally walk Omar Moreno to get to Foli with the score 3-1 and, as happened throughout the weekend, the strategy proved to be a disaster. Foli ripped a shot into the left-center gap and the game was no longer in doubt.

The second game – though replete with Phillie blunders like Larry Bowa bouncing a throw to first in the dirt to get a trotting Robinson and Pete Rose being unable to find the ball after it effort by Pete Rose to break it up. bounced out of his glove as Robinson spurted safely to the base – was more of a contest.

Philadelphia starter Dan Larson was impressive, but not nearly as much as was Robinson. Except for a homer by Bake McBride in the seventh, Robinson was just about faultless. He limited the Phillies to four hits and in only one of the seven innings that he pitched did they have more than one baserunner.

"I didn't have a breaking ball." said Robinson. "I don't know why, but it wasn't there. I stuck mainly with my fast ball." And it, obviously, was enough.

Despite the one-sidedness of the series, none of the Pirates, not unexpectedly, was ready to forget about the Phillies.

"Two years ago almost the same thing happened to us," said Robinson. "We went down to Philadelphia and took a bad beating and were something like 14½ back. But we came bark to come within one game of them. The Phillies are a great team. They won't let this get them down."

Phil Garner, who had three hits and a sacrifice fly and two RBIs in the opener, felt the same way. "I might say that a club of lesser character would let a series like this put them away," said Garner. "But I'm impressed with Philadelphia. They have all the ingredients of a great club.

"We can't count them out. We can't let our guard down. I don't feel like we hold any mystique over them. They're still a good club.

Only Ed Ott gave some indication that deep down the Pirates feel they may have put an end to the Philadelphia threat.

"This should hurt Philadelphia mentally," he said. "It could be tough for them to get back on. the track. If they don’t do well against the Cubs (in a three-game series beginning today) they could go right out of the race.”

Should that happen, the more than 100,000 who watched the Phillies play over the weekend at Three Rivers would not be surprised.

PIRATE NOTES - The Phillies gave an indication of what was to come in the second inning of the opener when left fielder Lonnie Smith could have caught Willie Stargell's fly ball but let it get past him for a triple, and when a decent throw at third by catcher Keith Moreland would have retired a stealing Bill Madlock.

When the Phillies got a one-out double and a two-out single off Jackson in the ninth inning of the second game, Tekulve came on to get the final out and pick up his 17th save... Mike Easler had two doubles and a sacrifice fly in the second game while Lee Lacy homered... Three double plays helped Robinson.

Dave Parker sat out both games with a knee injury suffered Saturday. He's expected to play tonight against the Mets when Buddy Solomon faces Roy Lee Jackson.... Bert Blyleven, scratched from a start yesterday because of a back injury, is expected to pitch tomorrow night. 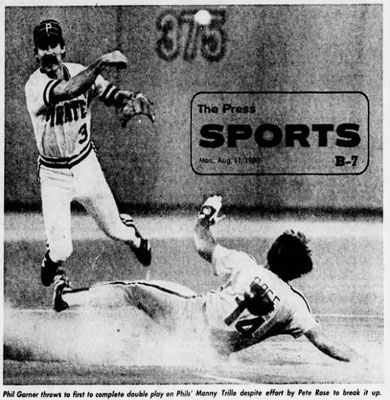 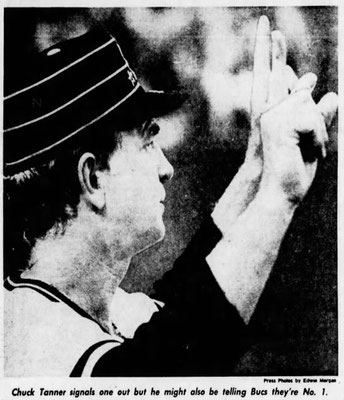 Pete Rose could swear he saw a little of Fred Hutchinson in Dallas (Bleeping) Green, along with Attila The Hun, Genghis Khan and Charles Manson.

If any Philadelphia Phillie had any questions about Green's tolerance level, they found the answer between games of yesterday's double-header loss to the Pirates.

For some reason, the Phils, losers of 10 straight road games and six games behind the first-place Pirates and Montreal, were playing baseball like beer-league soft-ballers.

Hutchinson, the one-time fiery Cincinnati manager, would have been (bleeping) proud. Under turbulent skies, the explosion echoed down the three rivers.  God supplied the lightning. Green provided the thunder.

"This (bleeping) game ain't easy," blared Green, his voice booming through the locker-room door. "It's tough, especially when you have injuries. You gotta stop being so (bleeping) cool.

"You gotta get this through your (bleeping) heads. If you don't, you'll be so (bleeping) buried it ain't gonna be funny. Get off your (bleeping bleeps) and just be the way you can be.

"You're a good baseball team, but you're not now. And you can't look in the (bleeping) mirror and tell me that you are. You tell me you can do it, but you (bleeping) give up.

Not bad. In less than a minute's excerpt of Green's speech, he shouted 11 expletives (non-deleted), three less than the number of hits his team slugged in the double-header. Was it effective?

"Obviously it didn't help a great deal, because we lost. What he bad to say made a lot of sense, though."

Apparently, reliever Ron Reed didn't agree. In the seventh inning of the second game, the Pirates leading, 4-1, with Mike Easler at second, Green went to the mound and ordered Reed to intentionally walk Willie Stargell.

"I haven't walked so many people since I've been a manager," Green said. "I haven't had any second guesses about walking people. The problem was getting the next guy out."

Reed didn't want to second guess. He argued the point immediately. Nevertheless, he walked Stargell. For once, the strategy worked as Bill Madlock hit into an inning-ending double play.

The Phillies played poorly all day. In the first game, Lonnie Smith tried to shoestring a Stargell line drive, missed and enabled the 39-year-old first baseman to reach third with an exhausting triple.

Still, Rose, who vented his frustrations with an obscene gesture to rowdy fans behind the Phils' dugout, was impressed with Green.

In his early days at Cincinnati, Rose remembers the fiery Hutchinson. Once, Hutchinson was so upset with the Reds he threw a bag of baseballs through a window.

Chuck Tanner remembers a time when Hutchinson stormed out of a dugout, roared down a runway and broke every lightbulb on the trip with his fist.

Hutchinson always left trails of broken chairs and splintered wood. He even had a punching bag for home games to vent his anger.

"There's a time and place for everything," Rose said. "Sometimes it works; sometimes it doesn't. Maybe it takes a day or two to take effect. Just because a manager screams doesn't mean the team's gonna score 10 runs.

"We got beat, 4-1. There was a lot of comment and chatter on the bench. Obviously that wasn't the same team that played the last three series in Philadelphia. The Pirates beat us four in a row. This was their weekend. I think Chuck Tanner could have got a hit."

Rose admitted he once told former managers Dave Bristol and Sparky Anderson to shout if they wished. He even told them to start with him to get the juices flowing.

"Hutch didn't keep things inside him," Rose explained. "Sparky and Bristol did. We started to play lackadaisical as a team. That's when a manager has to speak up."

Last week the Pirates had similar feelings. They were m me midst oi a six-game losing streak. Players were hurt. Defense was faulty. The Fam-a-lee was troubled. Tanner, however, didn't shout; instead he called for a positive attitude.

"Every ballclub goes through a lull," Phil Garner analyzed. "Thank goodness, because if a club didn't, it would probably win it by 30 games. We probably hit the Phillies in a down spot.

"They're a bit on the low side and that's when you have to get these teams, or, boy, you're going to have a tough time beating them when they get rolling."

The Phillies are only four games behind the Pirates and the Expos in the loss column. A trip to Chicago could be refreshing.

"What I want to do is put a gun to my head, but that wouldn't do any good," Schmidt confessed. "I just want to get out of (bleeping) Pittsburgh."