The one team proudly calls itself World Champs. The other was considered by many to be their worthiest challenger.

Why then were they acting as though the concepts of baseball, particularly those dealing with baserunning, had only recently been explained to them?

This was supposed to be baseball at its finest. The Pirates and the Phillies. That normally says it all. Classic matchup. Tense duel. Brilliant baseball.

On a scale of 10 it was, maybe, a three. The Pirates stumbled and staggered around the bases. They made a week's worth of mistakes. But in the end, what they have showed. The Willie Stargell homer, the Mike Easier big hit, the sacrifice bunt when it was needed. That, and not some abominable baserunner, did it for the Pirates last night.

A crowd of 30,354 got a lesson in how not to play baseball at Three Rivers as the Pirates defeated the Phillies, 6-5, a victory that moved them within one game of first-place Montreal.

It was more a clinic in bad baserunning than it was a baseball game.

ITEM: In the Pirate fourth, Bill Madlock makes a wide turn of second following an RBI double and is gunned down.

ITEM: Later in the Pirate fourth, Phil Garner takes enormous leads from first base and soon enough is picked off by catcher Bob Boone.

ITEM: In the Pirate fifth, Rick Rhoden advances too far off second on a grounder to shortstop and loses a race back to the bag with Larry Bowa.

ITEM: In the Philadelphia sixth, Boone races pell-mell for third base after a long hit to the outfield and is an easy out except Easier makes his throw to nobody.

ITEM: Later in the Philadelphia sixth, 39-year-old Pete Rose tries to score from second on a single to center and is out by, oh, 15 feet.

ITEM: In the Pirate sixth, with Madlock on third, Ed Ott believes that pitcher Dickie Noles is throwing to the plate. But instead, Noles is faking to third. He steps off the rubber and makes Ott an easy out at second base.

It went on and on. But after Lee Lacy's pinch-hit sacrifice fly scored Matt Alexander in the eighth and after Enrique Romo saved the game for Kent Tekulve in the ninth, the Pirates could smile about it.

"Maybe everyone was a little excited," beamed Pirate Manager Chuck Tanner, who watched his team win its fourth straight. "Both clubs have great players who play hard. When you play hard sometimes you make mistakes."

Ott, whose splendid sacrifice bunt in the eighth moved Alexander over to third, laughed when it was suggested that all the mistakes were a coincidence.

"We're a very emotional and very aggressive team," he said. "We know that whenever we play Philadelphia we have to make things happen. If we're making mistakes with our aggressiveness it's because we're trying to score runs.

"A couple of years ago we'd get a few runs ahead and we’d sit back. I'd rather be aggressive than lay back."

It looked as though the Pirates could truly lay back after Stargell's two-run homer and back-to-back doubles by Easier and Madlock bad produced a 3-0 lead in the third because Rhoden was totally in charge.

He retired the first 10 Phillies in order. He had a one-hitter through five and even when the Phillies scored twice in the sixth to move within a run, he seemed in control.

"They only hit one ball hard the whole inning,” said Rhoden.

But on two pitches they hit two balls hard in the seventh. Consecutive pitches produced home runs bv Garry Maddox and Manny Trillo and the Pirates, who had scored twice in the sixth, led by only a run, 5-4.

"The ball Maddox hit wasn't even a strike," said Rhoden. "I was surprised that he hit it out.  It was bad inside."

Rhoden finished the seventh without additional trouble but Tekulve came on to start the eighth. "I could have gone on," he said. "Maybe I would have got six straight out. But I was starting to lose a little on my ball. It doesn't matter who finishes."

The Pirates figured Tekulve would finish. But a walk, a single and a double play grounder allowed the Phillies to tie the game, a fact that was shortly to allow Tekulve to get a win instead of a save.

And for a lot of the somewhat embarrassed participants it was an end that came none too soon.

PIRATE NOTES - Rhoden continues to be a hitting whiz for the Pirates. He doubled in the fifth and singled home Madlock in the sixth. He's six for 16 (.375) this season. In his only at bat last season, Rhoden had a hit. "I've always been a good hitter," he said. "I batted fourth in amateur ball. I've never batted below .200 in the majors and one year I batted over.300."

The game was delayed 1 hour, 26 minutes at the start because of rain... The Pirates passed the million mark and are some 330,000 ahead of last year's attendance figures... Stargell's homer followed a single by Dave Parker in the third and came off Dick Ruthven... The loss went to Tug McGraw, who came on in the eighth... Rose had three hits. 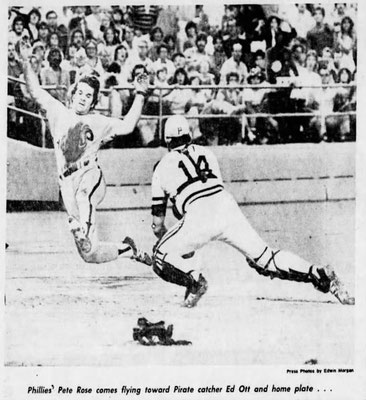 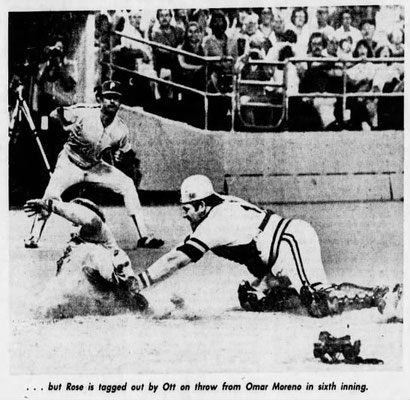 At first the Pirates were the dominant team. And then the Phillies took charge for three years. But the Pirates regained their position of supremacy last year and maintain it this season, though both teams, at the moment, trail Montreal.

Neither team needs extra motivation in this series. But Matt Alexander may have given it to the Phillies last night.

The Pirates' designated runner did a bit of a backward dance across home plate with what was to be the winning run in last night's 6-5 Pirate victory.

It's something Alexander has done before but never against the Phillies, who didn't like it a bit. Catcher Bob Boone could hardly believe what he was seeing. He said something to Alexander, who was able to come home so easily because of Lee Lacy's deep sacrifice fly.

"I'm not trying to show up anyone," said Alexander. "It's just my way of relieving pressure. If they want to they can call me hot dog. It's the first time the Phillies have seen me do it and they're upset.

"But I'm not trying to show them up. That's my style. I've been doing it for five years. I started it with Oakland.

"I can see where there might be a few words about it in batting practice tomorrow. But if the opportunity comes up tomorrow, I'll do the same thing again."

"I'm just glad to see him touch home plate," said Tanner. "It's okay with me. Just so he touches the plate. All I know is that he's helped us win five games and tie a couple of others."

Down the hall in the Philadelphia clubhouse, Manager Dallas Green was not so supportive of Alexander.

"He (Alexander) seems to think he has to do that thing to be part of the team. I wonder what they (the Pirates) would feel like if someone did that to them.

"I don't think it's very professional."